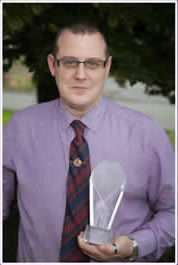 When we originally Awarded Curiositeaz in Perth it was well known for its Ghostly apparitions in a Quaint little back street tearoom.

Since winning our SHBA Danny and Elaines fortunes changed overnight. Gillies of Broughty Ferry heard about the Award the SHBA gave Curiositeaz and approached them about the possibility of opening up Curiositeaz style Cafes in all of their Stores !!! .

Danny and Elaine have now also opened another Curiositeaz premises which is a licensed Restaurant in Newport. --- Who said" The Scottish Home Baking Awards don't change lives.

Jessies Kitchen in Broughty Ferry ,Dundee were the proud winners of our 2012 Outright Winner Award . The Coffee House belongs to Ross and Jacquie Turriff along with the beautiful Garden Centre which has been in the family for over 50 years .
After winning our SHBA Jessies went on to gain massive Media Attention with Newspaper articles ,TV appearances and many more Awards- not least winning The Best Garden Centre Cafe Award just 6 x weeks after winning the SHBA.
Jessies have now gone on to expand their Coffee House due to the demand and success of our SHBA and now have double the room for their customers to enjoy.

Stefan Spicknall is one of Glasgow's finest Patisserie Chefs who manages to combine the Excellent blend of Good old fashioned Home Baking with the Classic french patisserie in his style of work.
Stefan had just opened his "Cottonrake Bakery" in Glasgow's Hyndland when we recognised him and Awarded him with his Outright Winner SHBA for 2011. www.cottonrake.com.
The Glasgow Heralds Cate Devine wrote a story on his SHBA in September 2011 remarking on his extraordinary talent and commitment to his Art. Since winning his SHBA Stefan is now moving onwards and upwards to New Premises incorporating a Bakery and Cafe in an entirely new location soon. WATCH THIS SPACE.

Email: This email address is being protected from spambots. You need JavaScript enabled to view it.